These statistics were collected in 2006 from nearly 200 senior IT managers and CIOs in the U.S. and Canada.

Network Personnel Ratios
In addition to software and hardware costs, most organizations have a significant cost allocation to personnel to maintain the network infrastructure. Just under 85% of the sites taking part in the study reported that they had dedicated networking support personnel. Ten percent of the companies had only a single person supporting their networks. The median number of network support personnel was three. Four of the study participants reported having more than 100 IT staff members allocated to network management and support.

The full version of this report provides network support headcount as a percentage of the total IT staff, breaking down this ratio by organization size. These statistics show that, in general, as organization size increases a smaller ratio of network personnel to total IT staff is required. These staffing percentages clearly show the effects of economy of scale–as companies increase in size, they can more economically meet maintain their network requirements.

Network Staff Productivity per Desktop and per User
The productivity gains of large companies are also seen when measured by the number of desktops or number of users supported by each network staff member. The full version of this report provides these statistics by organization size.

Our survey clearly shows that while larger organizations tend to apply a greater percentage of their IT budget toward networking infrastructure, they receive more “bang for the buck” through more efficient usage of network personnel.  Network budgetary percentages grow in direct proportion with the size of the company, but networking staff headcount ratios fall as companies get larger.  Furthermore, at the larger companies each network staff member provides support for a greater number of desktops and users.

While smaller companies may be at a competitive disadvantage in attempting to allocate their scarce IT dollars to maintaining and improving their networks, managers at these companies should not shrug off these costs.  Instead, paying attention to how funds are allocated to networking can increase productivity despite the handicap of a smaller organization size.

As the full report shows, spending on network infrastructure and personnel varies by organization size within predictable ranges. Therefore, network spending and staffing are more easily benchmarked than other functions that the IT executive must manage. By paying close attention to deviations from the benchmarks, the IT executive may find untapped opportunities to maintain the network more cost effectively.

In cases where managers find that their networking budget and staffing differ from the benchmarks, further investigation is warranted to identify the causes of the deviations. This investigation may determine that spending and staffing above the benchmarks is warranted, or it may identify opportunities for cost savings or more efficient allocation of personnel. No matter what the outcome, a properly conducted benchmarking exercise can yield insights into the role that the network function plays within the organization and provide justification for future development of the network infrastructure and support staff.

This Research Byte is a brief overview of our report on this subject, Network Spending and Staff Ratios by Organizational Size. The full report, is available at no charge for Computer Economics clients, or it may be purchased by non-clients directly from our website at https://avasant.com/report/network-spending-staff-ratios-by-organization-size-2006/ (click for pricing). 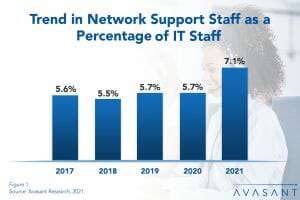