The current benchmarks shown in this article are taken from the book, Best Practices and Benchmarks in the Data Center, which is available for purchase on our website.

Measuring Storage Management Practices
One measure of effective disk storage management is the percentage of storage that is unused. Although data centers need some amount of unused disk space to accommodate growth in data volume and spikes in transactional business, having too much unused disk space is simply a waste of money. With the cost of disk storage declining every year, it does not make sense to have excessive storage capacity far in advance of need.

Another measure of good storage management is to look at the percentage of disk space that has been accessed within some period of time (e.g. 15 days). A disciplined approach to disk management considers how often files are accessed and what kind of response time is required for retrieval. Those files that are infrequently accessed and do not require immediate retrieval are best archived to offline storage, reducing online storage requirements.

Unfortunately, by both of these measures, disk storage management practices have declined over the past decade, in mainframe, UNIX, and Windows server environments.

Mainframe Storage Management Performance
As shown in Figure 1, management of disk storage in mainframe environments has declined since 1997, by both measures of storage management discipline. In 1997, the average benchmark participant in the mainframe environment had 68.5% of disk space allocated with 575 installed MIPS and 2.2 TB of installed disk storage, leaving less than a terabyte unused. Today, nine years later, the average mainframe benchmark participant has grown to 2,208 installed MIPS and 11.6 TB of disk installed, but only 61.3% of it allocated. Therefore, 4.5 TB of installed disk is empty. 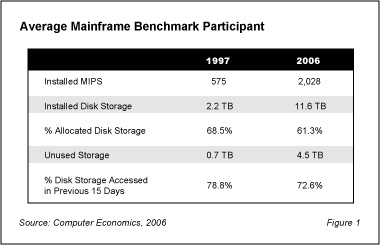 Why have mainframe storage management practices been declining? There are several reasons: 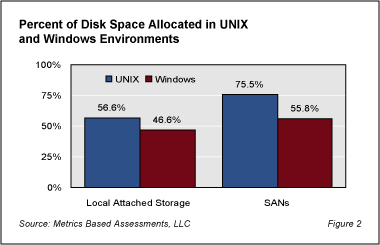 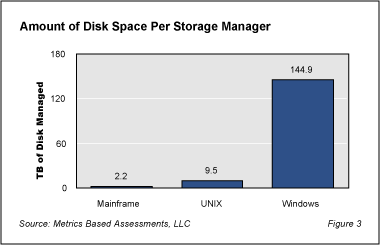 As we have seen, disciplines in managing disk storage are not improving. In mainframe environments, where storage management has historically been the strongest, storage performance has been falling by every measure. Disciplines in UNIX environments, and especially in Windows server farms, are even worse. The falling cost of storage may seem to make storage performance and utilization a lower priority. However, the amount of data being managed in many organizations is exploding. Therefore, effective storage management is still needed to control the costs and optimize the performance of storage. Although SANs and storage management tools can help in the effort, ultimately there must be skilled staff members whose job it is to manage this critical data center resource.

Current benchmark data is available in Levin’s book, Best Practices and Benchmarks in the Data Center.