Since 1889, Kelley-Clarke Seafood has been in the business of bringing fish to market. Over the years, they developed an IT infrastructure based on the Data General MVS operating system and a custom set of highly integrated COBOL programs that ran the business. The programs tracked inventory, sales, and the distribution of seafood to their nationwide retail grocery and food service customers, and they automated accounting functions including broker commissions and marketing expenses.

Like many businesses, Kelley-Clarke was concerned that Data General would phase out support for the aging hardware. In the meantime, they found that their maintenance contract and equipment were becoming cost prohibitive to support. To resolve the problem, the company would have to migrate their legacy application with nearly 270,000 lines of code to another platform, or scrap it altogether and begin anew.

While making such a monumental decision about their application infrastructure, Kelley-Clarke contemplated the future of the application as well. It was currently character-based, and it presented reporting and printing challenges. According to Joe Lundberg, Division Controller, “It took major programming to get the information out of the system and into a spreadsheet.” In addition, there was no way to adapt the existing matrix printing capability to a more modern laser printer network.

Kelley-Clarke wanted to adopt a strategy that would carry their application forward into the 21st century. Ultimately, Lundberg says, they “needed to find something more modern and less expensive to maintain.”

Rehost or Rewrite?
Kelley-Clarke considered replacing the existing system with an off-the-shelf package. Unfortunately, there was no single application that met all their business needs. They also investigated rewriting the application in Visual Basic. That would have required a significant investment of time and resources just to recreate existing business logic, not to mention the tremendous resources required to debug a new application. Both of these options would require retraining employees. Another choice was to migrate their application and associated data files to open-source COBOL on a new platform.

Kelley-Clarke performed a cost analysis of the three alternatives, factoring in the hidden costs of staff retraining and project duration, as well as the project cost. They found that the rehosting solution was roughly 50% less expensive than rewriting or buying an off-the-shelf package, and it was at least four to five months faster. The expense that Kelley-Clarke would save by rehosting their application was significant, and rehosting was the only option that allowed them to preserve the business logic of the existing application.

Kelley-Clarke decided to convert their existing application to ACUCOBOL-GT, an open systems COBOL developed by San Diego-based Acucorp, Inc. For the operating system, they selected Windows NT, in part because it is easy to administer but also because they were already running a Windows NT network for a separate database application. ACUCOBOL-GT provided an instant migration path to Windows NT. All that Kelley-Clarke had to do was convert the application and it would automatically run on the desired platform.

Kelley-Clarke no longer had development staff in-house. As a result, they hired an experienced migration consultant, Ed Buck of Huntington Pacific Computer Services, Inc., to perform the migration. Buck provided all of the technical conversion tools and code modifications that Kelley-Clarke needed to convert their application and data files. He also ensured proper integration with third-party tools.

Managing the Transition, Minimizing the Impact
Because Kelley-Clarke needed to access their financial data for banking and corporate use, Buck recommended converting their COBOL data files and transferring them to the Windows NT server first. The files needed to be converted from DG COBOL flat files to Acucorp’s Vision file format. Buck wrote a variety of custom file translation programs to perform the task.

While the application migration progressed, Kelley-Clarke was able to use Acucorp’s ODBC interface, AcuODBC, to access the COBOL data from Windows PCs. With AcuODBC, they could use tools like Microsoft Excel and Microsoft Query to view and confirm the integrity of the converted data right away. Once confirmed, they were able to create graphical reports for their corporate office and bank. In the past, a special program had to be written in order to extract the data to a common readable format.

As modules of the application were converted to the ACUCOBOL-GT language, Buck and Lundberg were able to install them on the new system and begin testing right away. To minimize impact on business operations, the old system ran parallel with the new one as the installation progressed, until finally, Kelley-Clarke simply decided to quit doing data entry on the old Data General system.

During the migration, 86 programs were rehosted to Windows NT. Most of the hardcoded program constants and file locations were replaced with externally defined file aliases and program constants. All printing functions were redirected from a dedicated matrix printer to network-based laser printers using a new graphical interface. Acucorp’s technical support department resolved an unanticipated file record locking issue that arose during the conversion.

Over 180 character-based screens were retained, but given a Windows look, while new programs were written with graphical screens using ACUCOBOL-GT’s graphical language extensions. Lundberg chose not to convert everything to a graphical interface because it didn’t improve speed or usability enough when compared to the additional effort required. Maintaining the existing look of the screens also eased the transition for the users.

Buck says, “I think the conversion went so smoothly because over half of the migration time was spent testing all the various pathways through the screen options, and making sure the programs behaved as expected. One of the things that made the process so easy was using Acucorp’s programmers’ workbench. It provided us with debugging features we couldn’t find in other editors.”

Outcome
Migrating to an open-source COBOL hosted on Windows NT allowed Kelley-Clarke to keep their trusted COBOL application and improve data access with minimal impact on day-to-day operations. An added bonus was a significant improvement in performance. The running time of all jobs was reduced from hours to minutes, even to seconds in some cases.

In addition, users can now easily produce reports or research business questions and problems. Lundberg says, “The change has been transparent; people love it. It’s been running really well, and the fact that we didn’t have any delays or major learning curves was a great benefit.”

Kelley-Clarke now has a system that will serve them for years to come and will be flexible enough to adapt to technological changes that may arise in the future. 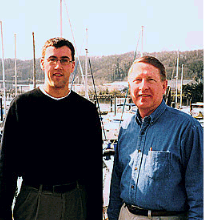