As shown in Figure 1 from the full report, Application Developer Staffing Ratios, the application developer ratio is down slightly again this year. The ratio is 13.6% of the IT staff at the median this year, down from 13.9% in 2018 and 14.5% in 2017. That is nearly a full percentage point decline over two years. 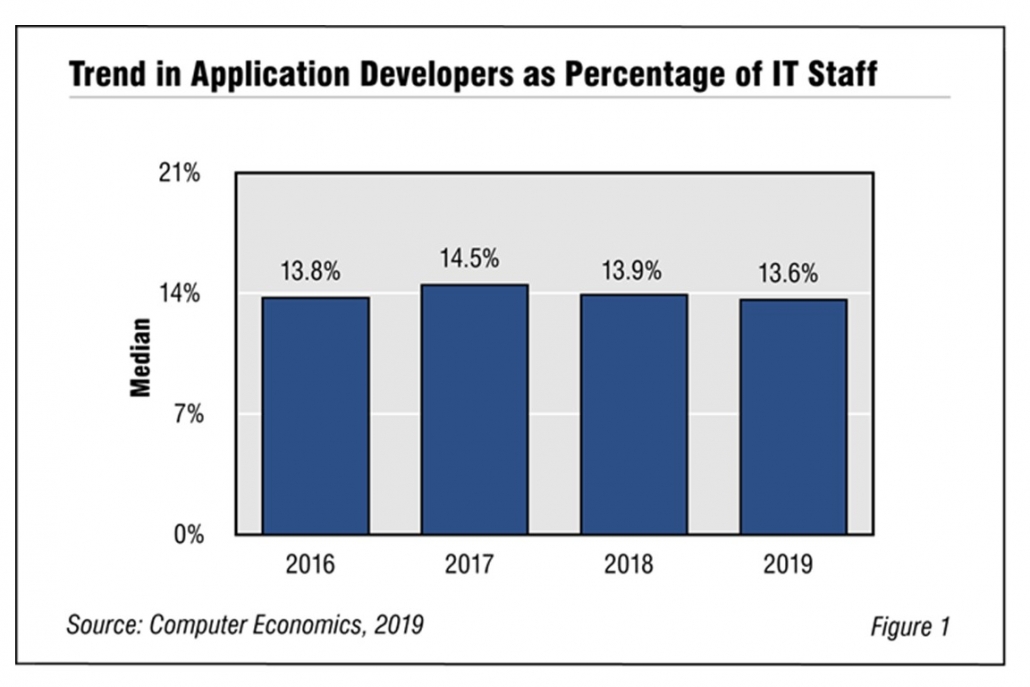 However, simply looking at the staffing ratio does not tell the whole story. Other factors are at play. The first is that the application footprint is increasing in IT organizations every year, and despite the growth of software as a service (SaaS), the percentage of custom-written code has not changed significantly over the past decade.

At the same time, application developers are not the only ones building software these days. Many requirements for custom software can be satisfied by IT personnel outside the development group and even by users who can write their own code.

Also, in recent years there has been an increase in IT job functions outside the development group. Data analysts, IT finance, and vendor management are just a few of the examples. As head count in these positions increases, it tends to hold down application developers as a percentage of the total IT staff. In other words, the need for software developers may not be declining so much as other IT staff functions are growing faster.

“It’s hard to pin the small relative decline is application developer staffing on just one factor,” said Tom Dunlap, director of research for Computer Economics, based in Irvine, Calif. “Some trends are increasing the demand for developers, while other trends are making them more productive or allowing end-users to do more of the simpler development assignments. The net effect is a small decline, but the overall demand for developer skills remains very strong.”

The full report uses three metrics to gauge developer staffing: application developers as a percentage of the IT staff, users per application developer, and applications per developer. We provide benchmarks for the composite sample, by organization size, and by sector. We also provide a benchmark for the larger Application Group, which includes personnel engaged in application maintenance, web development and support, quality assurance and testing, data management, and business systems analysis. We conclude with some practical recommendations for optimizing the productivity of application development personnel.

This Research Byte is a brief overview of our report on this subject, Application Developer Staffing Ratios. The full report is available at no charge for Avasant Research subscribers, or it may be purchased by non-subscribers directly from our website (click for pricing).