IT spending on business applications has doubled as a percentage of the IT operational budget since the start of the Great Recession, accelerating what has been a long-term, secular trend in IT spending.

As shown in Figure 1 from our study, Long-Term IT Trends in the Post-Recession Era, business applications accounted for about 11% of the typical IT operational budgets in 2007. By 2014, that percentage rose to 23% for the average organization in the composite sample, a dramatic but not necessarily surprising trend. 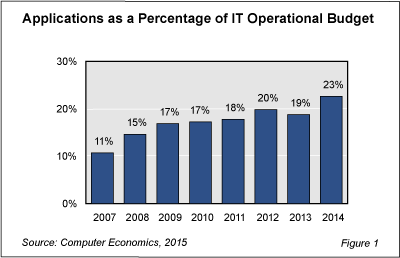 IT analysts have been observing for decades that economic value has been shifting to software and away from hardware, a trend particularly evident in the era of client/server computing. However, in this case, the rising portion of IT resources being consumed by software in the application layer is not tied to declining hardware costs. Rather, it appears to be tied to declining labor costs, which suffered the most during the downturn.

What the trend line shows is a big jump at beginning of the period and at the end of the period. As the recession hit, organizations pulled back on all types of spending, including application investment. However, we see spending on applications fared better than spending in other areas and, as a result, jumped as a percentage of overall IT operational spending from 11% in 2007 to 17% by 2009. The large amount of depreciation in the application expense category partly explains the rise.

The trend line then flattens for three years as the recession ends but the recovery never seemingly begins. After a false start in 2011, IT operational budgets began to grow in 2012. Along with the growth came renewed growth in spending on applications, this time including an uptick in SaaS spending. The pattern is clear: spending on applications as a percentage of the IT budget rises when the economy turns down and rises again when the economy turns up. This would indicate the growth in application spending as a percentage of the IT operational budget is a secular rather than a cyclical trend.

Now that IT budgets have begun to recover from the Great Recession, it is important to consider how the world has changed. In the full study, we analyze which trends represent long-term, ongoing secular change in IT spending, staffing, and management. These are the trends IT organizations need to understand. While not all IT organizations will want or need to take the lead in the disruptive changes ahead, all need to ensure that they do not get caught at the rear.

The full study presents its finding in four parts: First, we look at changes in the mix of spending within the IT operational budget since 2007, documenting a somewhat dramatic shift in how IT organizations are allocating resources. In the second part, we look at metrics related to IT staffing, contingency workers, outsourcing, “shadow IT” spending, and IT spending as percentage of revenue to ascertain how these key metrics are changing. Third, we present data from our study on companies that have shifted aggressively to a cloud model to get some idea of what IT budgets might look like in the future. We conclude with a summation of findings and recommendations for navigating secular changes occurring today.

This Research Byte is a brief overview of our report on this subject, Long-Term IT Trends in the Post-Recession Era. The full report is available at no charge for Computer Economics clients, or it may be purchased by non-clients directly from our website (click for pricing).