Storage vendors have been promoting virtualization as the next big step towards improving the ability of data centers to maximize storage resources, gain flexibility, and lower the cost of managing increasing amounts of data. Industry leaders including EMC, IBM, NetApp and Hewlett-Packard are all offering storage virtualization products, while dozens of storage-focused vendors such as DataCore and FalconStor are delivering various hardware, software, and appliance solutions. Dell’s recent $1.4 billion acquisition of EqualLogic, an iSCSI SAN virtualization vendor, is another sign the market is maturing.

This Research Byte is a summary of our full report, Storage Virtualization: Early Adopters Achieving Benefits. The full report assesses the economics of storage virtualization, based on the experiences of early adopters as reported in our most recent annual survey. It provides an explanation of storage virtualization technology to gain insight into its potential benefits, and concludes with recommendations for successful implementation. In brief, the full report finds that most adopters are experiencing positive ROI with relatively low risk, but that potential benefits are not yet being fully realized.

Interest High but Adoption Limited
As with any new technology, data center managers need to weigh the risks against the presumed benefits. With one-third of large enterprises reporting in a Computer Economics survey that they are increasing investments in storage virtualization, the time is ripe to gain some understanding of adoption rates, return on investment (ROI), and total cost of ownership (TCO). The analysis in this report is based on the experiences of more than 200 CEOs and senior IT managers as reported in our annual survey conducted in the first quarter of 2007.

While there is a fair amount of researching and piloting of storage virtualization across all segments of the survey population, actual adoption remains somewhat limited to larger organizations. As shown in Figure 1, about 22% of all organizations have implemented and are increasing investments in virtualization. Another 8% have deployed the technology but have no plans to go further, either because they have already fully implemented the technology or have decided against further rollout for the time being.

The relatively small percentage of companies using the technology indicates that these organizations are a pioneering population of early adopters. As the technology matures, though, we expect to see a substantial increase in users as signaled by the 41% of the composite sample that are in the researching, piloting, and initial implementation stages. 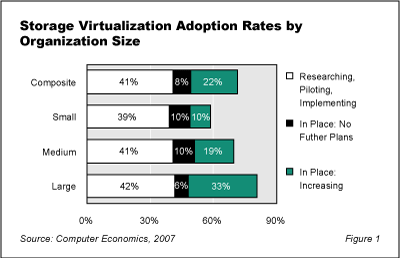 Consistent with the norm, small organizations in this study are far less aggressive than their larger counterparts about adopting emerging technologies at this still-early stage. Only 20% report storage virtualization in place and only 10% plan to expand their investments. As indicated in our earlier study, Reassessing Storage Area Network Economics (Nov. 2007), many small organizations are now investing aggressively in SANs.

This Research Byte is a brief overview of our report on this subject, Storage Virtualization: Early Adopters Achieving Benefits. The full report is available at no charge for Computer Economics clients, or it may be purchased by non-clients directly from our website at https://avasant.com/report/storage-virtualization-early-adopters-achieving-benefits-2007/ (click for pricing).