Home » Product » The Business Case for Software as a Service

The Business Case for Software as a Service

Software as a service (SaaS), sometimes referred to as “software on-demand,” is becoming an increasingly popular way to implement business applications. This article is an executive summary of our full report, Software as a Service Shows Attractive Payback, which provides a brief overview of SaaS and analyzes the current adoption rate and ROI/TCO for this technology for users.

What is Software as a Service?
The concept behind software as a service is simple. Instead of a software vendor selling a software license that the client then implements and maintains in its own data center, the vendor (or, more properly, the service provider) hosts the system on its own computers in its own data center and provides access to the system on a subscription basis. In a nutshell, software on-demand turns software from a license sale to a subscription service. The term software as a service may be new, but the concept goes back to the early days of business computing, to the time-sharing systems that were run by service bureaus and more recently to the application service providers (ASPs) that came to being in the late 1990s.

Everyone’s favorite example of software as a service is Salesforce.com, which is built with the multi-tenant model. Salesforce.com offers complete sales force automation and CRM functionality for a flat per-user, per-month fee of less than $100. There is no upfront license fee, and small deployments can be up and running in days or even hours. There are other examples of providers of CRM on-demand, including Siebel (now part of Oracle), which offers its traditional CRM offerings on a single-tenant hosted basis as well as a pure on-demand CRM product now called Oracle CRM On Demand.

There are hundreds of providers of software as a service. Examples include ADP, the long-time provider of payroll services; Netsuite, a complete ERP system offered as a service; Rightnow, another CRM provider; and Webex, the familiar provider of on-demand web conferencing. 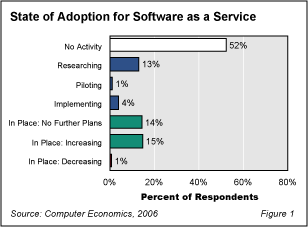 Furthermore, there are another 18% of organizations that are either researching or in the process of implementing some form of software as a service. About half of organizations report no activity.

The full version of this report documents the differences in adoption rates for SaaS by size of organization: small, mid-size, and large companies.

The Economic Characteristics of Software as a Service
Among organizations that have implemented some form of software as a service, the economic results are positive, according to our 2006/2007 survey. This is, no doubt, a strong factor in the high adoption rates that we have seen thus far.

Our research finds that software as a service is still in its early stages of adoption and it is growing quickly. IT managers will be well advised to investigate this model for business applications where appropriate.

This Research Byte is a summary of our full report, Software as a Service Shows Attractive Payback, which may be found on our website at https://avasant.com/report/software-as-a-service-shows-attractive-payback-2006/ (click for pricing).