One of the key challenges facing IT executives in the year ahead will be recruiting and retaining application developers. But the perceived skill shortage is not limited to that position alone: in a recent poll by the Society of Information Managers, a majority of CIOs cite recruitment and retention as their top concern overall. Application developers, however, are likely to be in particularly strong demand.

According to Robert Half Technology, a recruitment and staffing firm based in Menlo Park, CA, lead application developer salaries will rise 7.6% next year, making it the fastest-growing position salary-wise of any in the IT landscape. Close behind are application architects. Already the highest-paid among the developer group, they stand to get a 7.5% bump next year if Robert Half’s predictions are correct.

That is not good news for IT executives. As we have documented elsewhere, application software is already accounting for a growing percentage of the IT budget and application development outsourcing is on the upswing. Rising wages for application developers should accelerate both those trends.

Fastest Growing IT Salaries
Overall, Robert Half is predicting a robust 5.2% rise in base salaries for all IT workers, so application developers and architects are not the only ones looking forward to a boost in personal income. Rounding out the top five jobs in terms of salary growth, which can all expect above-average 7% pay hikes, are messaging administrators, data modelers, and network managers, as shown in Figure 1. 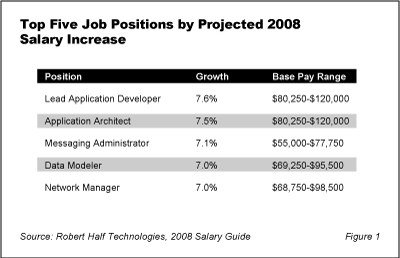 According to Robert Half, the reason that network and messaging administrators’ salaries are increasing is the expansion of their responsibilities to include security, compliance, and telecommunications, including mobile devices like cell phones and PDAs. Some companies are even creating new “mobility administrator” positions, further expanding the network administration staff. “It’s added complexity; it’s added staff; it’s a perfect storm,” says John Estes, vice president of Robert Half Technology.

But application developers are going to be at the front of the line. Estes cites two key reasons for the demand: One is that many companies, after putting projects on the backburner during the slowdown in the early part of this decade, have finally been stepping up investments in new projects amid the seemingly sustained upswing in IT spending. Another driver is the rush by companies to web-enable applications. “A lot of companies are not necessarily making new applications, they’re taking existing applications and making them web-friendly,” he says. He also says demand is particularly strong for programmers with Microsoft .Net, database, and open source development skills.

Keeping a Lid on Application Development Staffing Levels
Application programmers and systems analysts already make up the largest component (about 24.5%) of the total IT staff, according to our 2007/2008 IT Spending, Staffing and Technology Trends study. As this group already comprises such a large percentage of the typical IT staff, above-average salary increases for these positions will have a disproportionate impact on total IT spending for personnel.

As Figure 2 shows, companies have done a good job of keeping a lid on application staff headcount. As a percentage of the total IT staff, application programmers and systems analysts have trended downward slightly over the past four years, with a notable drop (on a percentage basis) seen this year. The group has declined from 30.8% of total staff in 2004 to 24.5% in 2007. 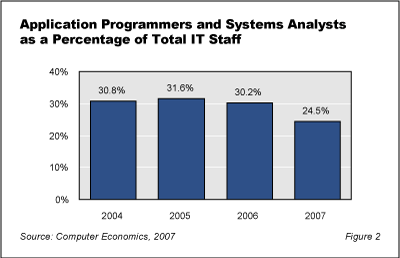 At first glance, the declining percentage of the IT staff allocated to application development may seem to contradict the forecast of rapidly rising salaries for this group. But further analysis explains the likely reason for these two seemingly contradictory trends.

If Robert Half’s 2008 salary forecasts materialize, the trend toward using contract workers and outsourcers to augment internal development work should accelerate. With the uncertain economy, IT executives are likely to keep one hand on the brake as the weak dollar and falling housing values put a damper on consumer spending. On the other hand, some large enterprises, many of whom as exporters benefit from the weaker dollar, will see their business outlook strong going into 2008.

The bottom line: Look for application development salaries and outsourcing levels to both accelerate in 2008. 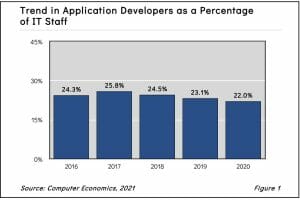 Factors Behind the Decline in Application Development Staffing 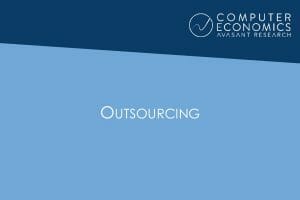