IT Operational Budget Growth Slowing in 2016

IT operational spending growth is slowing this year, to the lowest point since the start of the recovery in 2012. Likewise, IT capital spending is holding flat, and hiring plans are muted. Nevertheless, IT organizations continue to find money to invest in new initiatives, according to the Computer Economics annual IT Spending and Staffing Benchmarks study for 2016/2017.

As shown in the Figure 1-2 from the executive summary, IT organizations are planning for a modest 2.0% bump in the operational budgets at the median this year. Computer Economics attributes the weakness in IT spending growth largely to slowing corporate revenues. 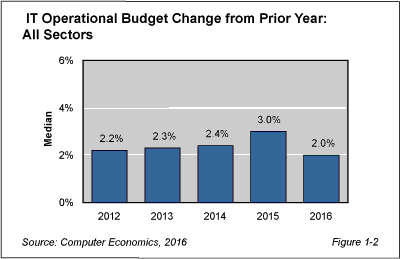 “We’re hoping that small organizations are not the canary in the coal mine,” said Frank Scavo, president of Computer Economics, Irvine, Calif. “A lot will depend on whether economic conditions strengthen or weaken in the second half of 2016.”

So far at least, the mood is not pessimistic. IT executives are as confident in their budgets as they have been in recent years, the study finds. A net 1% of companies are expecting to spend more than their operational spending plan, meaning that the number of IT executives hoping to get a green light to exceed their spending plans is slightly higher than the number anticipating a budget reduction as the year progresses. On balance, this indicator is an improvement over the minus-4 points recorded in 2015 and well above the minus-15 points at the start of the recovery period. IT executives feel a fair amount of certainty around their spending plans. While spending growth has slowed, there is no sense of panic.

Where is IT spending focused this year? The survey shows IT executives planning to focus new investments in business applications, security, and cloud technology.

As IT organizations move more applications into the cloud, there appears to be less appetite for investing in data center infrastructure. IT capital spending growth at the median is flat for the third year in a row, the study finds.

The spending plans for IT organizations also show restraint in hiring. The study finds that IT staff headcount will be flat at the median.

The Computer Economics IT Spending and Staffing Benchmarks 2016/2017 study is based on a detailed survey of more than 200 IT executives in the U.S. and Canada on their IT spending and staffing plans for 2016/2017. It provides IT spending and staffing benchmarks for small, midsize, and large organizations and for 22 sectors and subsectors. A description of the study’s metrics, design, demographics, and methodology can be found in the free executive summary.

This Research Byte is a brief overview of the findings in our report, IT Spending and Staffing Benchmarks 2016/2017. The full report is available at no charge for Computer Economics clients, or it may be purchased by non-clients directly from our website (click for pricing).