With current high levels of inflation and relatively low levels of unemployment, we would expect salaries to be rising strongly. But in the IT job market right now, that is not the case. Overall, our IT Salary Report 2023 forecasts that average wages for IT workers in the US will rise 4.0% in 2023. This is the same as the 4.0% we projected last year.

The job market is being influenced by a series of competing tensions. The “big quit” is slowing down, but it has not stopped completely. The BLS reports that four million people voluntarily quit their jobs in October, which is higher than normal. In addition, some large tech companies have reported layoffs. Although these new job seekers are now available for work, they do not yet make up entirely for a general shortage of talent, which has persisted now for several years. And, of course, there are fears of an impending recession, which means that some enterprises are likely to be more conservative about hiring.

So you have talent quitting to find more salary or better working conditions, while at the same time companies are in the middle of layoffs and trying to conserve cash in the case of a recession. This creates a situation where high-value workers are likely to be able to get much more than the standard 4.0% increase, but most will not see increases covering inflation.

Figure 1 from our full report shows that the salary trend we reported last year is continuing. Pay rates for IT workers will rise 4.0% at the median and 3.0% at the 25th percentile. Organizations at the 75th percentile are budgeting for a 5.0% average raise—a sign that wage pressure for most jobs is still under control. However, the planned pay raises do not even match the rate of inflation in the US. As measured by the CPI, the annual rate of inflation for the 12 months ending in October was 7.7%. 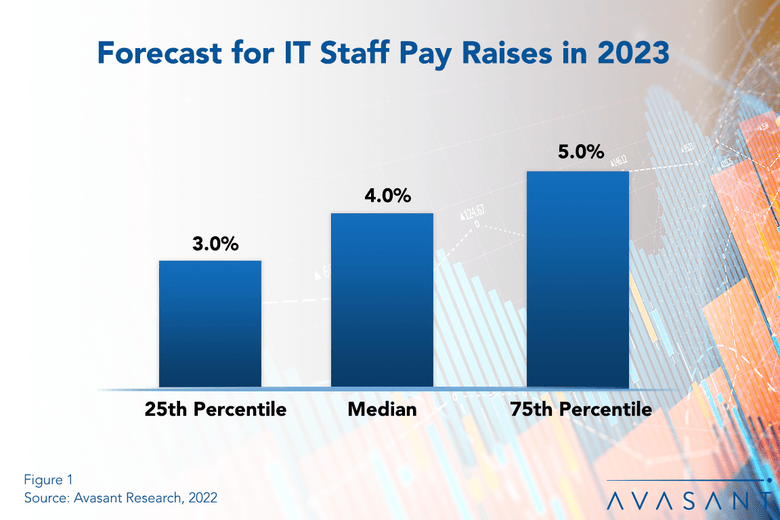 Hiring plans are also modest, with 53% of companies planning to increase head counts in 2023, which is lower than the 68% in 2022. It is also significant that only 5% anticipate reductions in 2023. About 42% of IT organizations anticipate not adding to their IT staff levels in 2023. Expanding head counts is the order of the day for most IT organizations in ‘23, albeit at a slower rate than last year.

Even though IT salaries are rising modestly, some IT workers can expect greater than the 4.0% average increase. Application developers and senior systems administrators, for instance, can be hard to find and often can demand higher levels of compensation. Business analysts with experience in certain industries, such as healthcare, utilities, or retail, can also demand greater pay raises.

On the salary-declining side of the ledger, we continue to see a decrease in median salaries for many positions, including disaster recovery administrator. In that case, service providers are taking more of the work, because they are well-suited to do so.

“If IT leaders are expecting a recession, most enterprises are still not responding with layoffs despite a few high-profile exceptions,” said Tom Dunlap, director of research for Computer Economics, a service of Avasant Research, based in Los Angeles. “Retention is the name of the game right now as companies view IT as a strategic necessity.”

The full salary report estimates 2023 salaries for 80 IT job functions in more than 400 US metropolitan areas and 20 sectors. The report is based on our annual salary survey of IT organizations in the US, along with other sources of compensation data as well as regional and industry data from the US Bureau of Labor Statistics. For trend information, we also use our annual IT Spending and Staffing Benchmarks study and data from our year-end Worldwide IT Spending and Staffing Outlook for 2023 study. A complete description of the methodology is provided at the end of this report.

This Research Byte is a brief overview of our report, IT Salary Report 2023. The full report is available at no charge for subscribers or may be purchased directly from our website (click for pricing). The complete 40-page executive summary and sample salary tables can be downloaded at no charge. 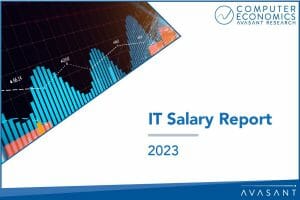 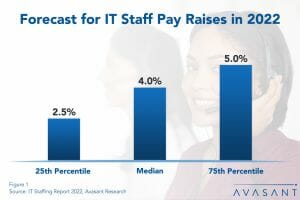 Biggest Salary Increase in a Decade for IT Workers 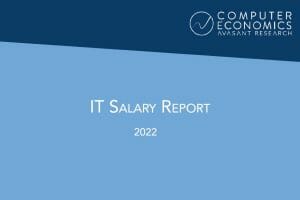