Home » Product » Most Windows and UNIX Servers Are Underutilized

Most Windows and UNIX Servers Are Underutilized

Computer Economics IT spending surveys over the past three years have seen strong increases in acquisition of computer servers, especially for mid-range servers (those costing between $50,000 and $500,000) and low end servers (those costing less than $50,000). Ever declining cost is one reason for the strong growth in these categories of computer hardware. But another reason is the tendency for many IT organizations to simply add new servers for every new application or processing requirement.

This has led to a situation where many data centers are crammed with servers that are largely unused, as shown in Figure 1. On prime shift, nearly 80% of production UNIX servers are less than 20% utilized. For Windows servers, the situation is even worse. Over 90% of the servers running the Windows operating system utilize less than 20% of their capacity. 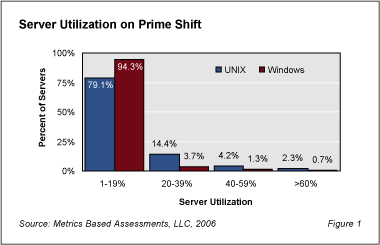 The proliferation of underutilized servers is a tremendous waste. Excessive numbers of servers consume floor space and drive up facility costs. They place heavier demands on data center cooling systems. They also are more costly to administer, as system administrator staffing is highly correlated with the number of servers being managed.

The good news is that many IT organizations are aware of the problem and have been increasing their efforts to consolidate server workloads and reduce the number of servers. Advances in technologies such as operating system virtualization and multi-core processors are encouraging data centers to run multiple system images on a single machine, further encouraging the reduction in server counts. Microsoft’s recent announcement to offer its virtualization technology at no charge, including the ability to support Linux as a guest operating system, will no doubt encourage even small data centers to undertake consolidation efforts.

Clearly, server consolidation is a right strategy to address the proliferation of underutilized servers.

Current benchmark data is available in Levin’s book, Best Practices and Benchmarks in the Data Center, which may be purchased at https://www.computereconomics.com/article.cfm?id=1116.

IT spending data, such as the hardware acquisition and server consolidation trend data in this article, may be found in our IT Spending, Staffing, and Technology Trends study. 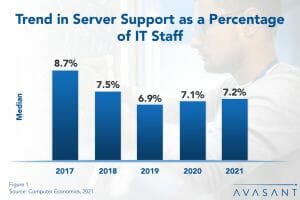 Server Support Staffing—Nowhere to Go But Down