Over the past year, Computer Economics has received a number of inquiries regarding typical staffing metrics for server support personnel. Although our annual IT Spending, Staffing, and Technology Trends study provides some useful statistics for benchmarking server support headcount, those metrics only report each job function as a percent of total IT staff. Because server support staff requirements are driven by factors other than the size of the IT staff, we determined that a specialized survey was needed to provide additional metrics.

This Research Byte is an executive summary of our full report, Server Support Staffing Ratios.

The full report provides an analysis of server support staffing requirements for data centers running any combination of Windows, Unix, and Linux servers, based on a survey that we conducted in the second half of 2006. The survey solicited detailed information regarding the number of server support personnel in the respondents’ organizations and how they spend their time, as well as data center characteristics such as the number and types of servers and operating systems, number of processors, extent of virtualization, and server growth rate.

Survey Demographics
After purging incomplete or unqualified responses, there remained 141 valid responses to the survey, representing data centers with as few as five servers to organizations with over 1,000 servers. Because the sample size is large enough, we are able to provide analysis by size of data center as defined by the number of servers (in any combination of Windows, Unix, and Linux). The study sample is therefore segmented as follows:

Server support personnel may be referred to by a number of different titles, including system programmer, system administrator, system engineer, computer operator, technical support, and others. Therefore, when counting server support personnel, we asked respondents to include all types of server operations, operational support, and technical support staff regardless of job title. We explicitly asked respondents not to count application programmers or help desk staff. We also instructed respondents to include first-level supervisors who also directly perform server support activities. Our goal was to determine how many support staff are required in association with a collection of servers, regardless of what the organization calls such personnel. 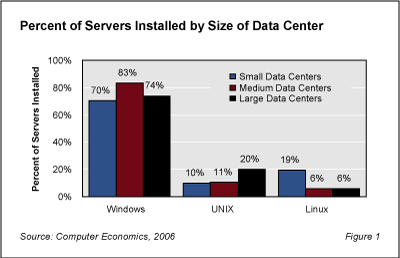 Staffing Ratios and Adjustments
The full report provides benchmarks in terms of the number of servers and number of OS instances that are supported by one support staff member, at the median, 25th, and 75th percentiles. Because data centers have varying levels of activity for new projects, the full report also provides guidelines for adjusting the staffing ratios to account for project-related activities. Likewise, because some data centers do not have the help desk as a separate function, the full report also provides adjustments for any time spent by server support personnel in taking calls from end-users.

Impact of Server Virtualization
Running multiple instances of an operating system on a single physical server has become popular in recent years as a way of reducing overall data center costs. We were interested in examining the impact of such efforts in improving the productivity of server personnel. Therefore, the full report compares the server support staffing ratios in data centers with low levels of virtualization (less than 1.1 OS instances per server) against data centers with high levels of virtualization (1.1 OS instances per server or greater).

The full report concludes with three practical recommendations for improving the productivity of server support personnel.

This executive summary is a brief overview of our report on this subject, Server Support Staffing Ratios (2007). The full report is available at no charge for Computer Economics clients, or it may be purchased by non-clients directly from our website at https://avasant.com/report/server-support-staffing-ratios-2007/ (click for pricing).

Do you also need staffing ratios for other IT job functions? Consider this collection of the latest and most up-to-date versions of all of our staffing ratio reports, which bundles them all into a single report at a significant discount: IT Staffing Ratios–Special Report Bundle